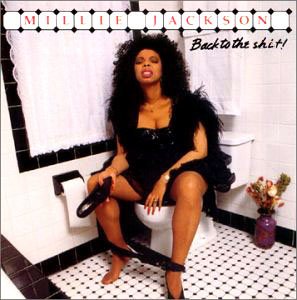 I've been holding back on using this album cover for a long, long while, but I can't hide its true awfulness any longer. I apologize if you're checking the blog over your lunch break.

Leaving aside the aesthetic appeal of watching Millie Jackson drop the kids off at the pool -- an action that may or may not wind up having Elvis-like consequences -- you've got to question the decision to come right out and refer to her own music as "the shit." I'm sure she meant it in the jive slang of "this is the shit!" but I'm wagering that most listeners would drop that "the" from that sentence when passing judgment on this craptacular album.

Speaking of the shit, it's time for another Friday Random Ten!

You all know the drill. Crank up your iTunes, set it to random, and give us the first ten songs that tumble out. If, like Millie Jackson, you'd like to give it your all, go ahead and throw in a Coolness Self Audit as well.

1. Lee Dorsey, "Yes We Can Can" -- Incredibly funky '60s New Orleans soul from one of its lesser-known masters. A perfect creole blend of guitar, organ, horns and, if I'm not mistaken, cayenne seasoning. Plus, of course, Dorsey's infectious vocals. Excellent stuff. 9/10

2. Jurassic 5, "Twelve" -- A fairly decent track from Quality Control, but not exactly their best work in terms of either beats or rhymes. "One, two, Jurassic Crew / What we bout to do, brothers have no clue." Come on, boys. You're better than that. 6/10

3. Creation, "Making Time" -- Why yes, I do own the Rushmore soundtrack. Not exactly rare, but still some excellent British psychedelic prog rock. I believe this was their first and best single. 8/10

4. EPMD, "Crossover" -- For a hiphop group who framed most of their albums around a Stringer Bell-like business model -- Strictly Business, Unfinished Business, Business As Usual and Business Never Personal -- it's a little ironic to hear them talking here about other acts being sellouts looking just to the business side of things. Still, it's a great track and highlights Erick Sermon in his prime. 8/10

5. The Gourds, "Miss You" -- An encore track from their 3-CD live recording at the Bluegrass Inn in Nashvegas. Not as mind-blowingly brilliant as the other cover here (Snoop Dogg's "Gin 'n' Juice"), this is still an inventive one. The accordian intro makes you wish the Stones had done it that way too. 7/10

6. Loretta Lynn, "Out of My Head and Back in My Bed" -- Occasionally, Loretta Lynn veers into Lurleen Lumpkin territory, but this is a nice jaunty country number about stalking an ex-lover. Some nice classic country. 7/10

7. Slick Rick, "It's a Boy (Large Professor Remix)" -- Looks like it's Old School Day here at the FRT. This is a spare remix of a classic Slick Rick tune. With the music stripped down to a drum beat and a little bit of vibes, you get to bask in the beauty of Slick Rick's silky smooth rhymes. Very nice. 9/10

9. The Gruesomes, "Way Down Below" -- On first listen, this sounds like some undistinguished mid-'60s garage rock, but these guys were a short-lived group from the mid-'80s. Still undistinguished, though. 3/10

10. Nina Simone, "Black is the Color of My True Love's Hair (Jaffa Remix)" -- A very nice remix of the Nina Simone classic, courtesy of one of the excellent Verve Remixed CDs. It's hard to improve on the original, but this remix does it. 9/10

After a strong start, I managed to stumble badly at the end there. Still, that gives me a 7.0 average, yet another in a long string of mildly mediocre ratings on the Coolness Scale. I like to think of it as my own personal crusade to revive the noble tradition of the Gentleman's C. Or maybe I'm just lazy. You decide.

Alright, folks, let's see what you've got. Drop your own FRT in the comments, with or without a Coolness Self-Audit as the mood may strike you.
Posted by Otto Man at Friday, March 24, 2006

First a naked old man on his tippy toes over a fan, now this. TGIF so I can drown these images away while drowning myself in Smitty's random ten and simultaneously doing the "Hooray Duke lost to an SEC team" dance.

Gluttony is such an overrated Cardinal Sin. If God din't want me to enjoy my food and drink, he wouldn't have given me a mouth.

With that, this week's Random Ten Beers Paired with Food!

1) Founders Devil Dancer with black pepper-crusted New York strip steak. The huge, spicey hops in this beer serves as a perfect match for the hard pepper crust. The sweetness in the residual flavor of the malts serves as a great counterpoint to the char on the steak from the grill.

2) Brooklyn Brewing Co. Brown Ale with Memphis-style BBQ ribs. True Southern BBQ, dry-rubbed, smokey and fall-off-the-bone tender, matches with tear-jerking perfection with this beer. The hops help cleanse the palate between bites, and the malt sweetness is perfectly marries to the smokey dry rub on the ribs.

3) Duvel. This Belgian Strong Ale is amazing as your appetizer beer. Poured into snifters, the thick, rocky head and fruity sweetness blend well with your cheese-and-crackers, your salmon bits, or just ALONE.

4) Victory Brewing Company Golden Monkey. This is a Belgian-style Tripel, which again is amazing as your apertif. Drink this with Bleu Cheese, sharp cheddar, or gorgonzola cheese. Amazing point-counterpoint.

5) Got a pig roast? Shred a bunch of that pork onto your plate and wash it down with Fuller's ESB. The pronounced, toasted malt blends so well with the natural sweetness of smoked/roasted pig that it seems this is why the beer was brewed.

7) It's summer time. You're out on your deck or patio. Before you lies a giant boiled lobster, begging to be eaten. Ice tea is no good here. But Weihenstephaner Hefeweissbier provides that cold, sweet tang you're looking for; dry, tart and spicey. It blends so well with the natural sweetness of lobster that it seems those shellfish are native in Germany.

8) The best way I can think of to honor the deer that laid it's life down for me last November is to enjoy it with Ayinger Celebrator Doppelbock. Full-bodied, chocolatey and just a tad of floral hops picks up on the gaminess of the venison steak and send my tastebuds into bliss.

9) Big, huge greasy wurst, a massive side of sourkraut and a huge stein of Hacker-Pschorr Oktoberfest is gluttony through and through. The huge, robust malt in the beer is big enough to fight the spice and grease of the sausages. In fact, this beer with any "German" cuisine is a match made in....Germany.

10) Fragrant basmati rice beside a huge platter of pungent, spicey lamb curry is just waiting to go hand-in-hand with Bell's Two Hearted Ale. This tough American-style IPA has enough hops in it to cut right through all of the clove spice and curry to cleanse the palate so that each bite of food stands alone as the best you've ever had. The residual sweetness of the beer, as the dinner continues and the beer warms a little, is just what lamb asks for. The hops list the greasiness of the lamb off the palate as well to help uncover more flavors from the curry sauce itself normally hidden under that layer of grease (but such good grease) on the tongue. This is where it's at. You can die after this, a fulfilled person.

And this is too funny: my word verification for this post is: kautrd. Cow turd?!? Awesome. But there is no beer that matches Cow Turd.

That pic is brutal, Otto, brutal. How can that possibly have been made into an album cover?

1) The Shadow of Seattle - Marcy Playground. I like this song a lot, although I don't have any idea what it's about. 7/10

6) I Don't Mind the Pain - Danzig. I guess this song is a response to criticism of that awful Hunter song. 7/10

I just threw up in my mouth a little there...But Dorsey made it all better again.

3)Wilco- A Shot in the Arm. Love that Wilco! This isn't my favorite, but it does get a little Flaming Lipsy at the end, which is good. (7/10)

5)10,000 Maniacs- The Painted Desert. Um...that's a little embarrassing. But not as embarrassing as if it had been something from Natalie after she went solo. I do still love her voice though, even if the words she sings are lame. (3/10)

6)Ministry- Burning Inside. That's more like it! Hells yeah! I was about to fall asleep before this little number came up. (7/10)

7) The Breeders- Roi. Pretty cool, but it sort of seems like something they improvised jsut to pad out the album. (6/10)

8)Bjork- You've Been Flirting Again. "Give her some time, give her some space"...wise council, Bjork, but it makes for a ponderous song. But plus one point just for being so darn cute. (6/10)

9)Beck- Whiskeyclone, Hotel City. Ah, it's my favorite Scientologist of all, with the possible exception of Nancy Cartwright. But, damn, this list has been valium-drenched! (5/10)

Well, that makes todays average 5.7. Looks like it's back to the minors for me...

WHAT IS SHE DOING WITH HER SHOE???

3. "Dream," Fleetwood Mac -- This reminds me of hot, languid cloudy days when the air conditioner's broken. The drums are also a lot more interesting than you'd expect. But still. 4/10

5. "Kulau," Dungen -- I can't possibly recommend highly enough this Swedish psych masterpiece. This isn't one of the best songs on it, but my goodness. It's like a blend of Piper at the Gates of Dawn and Traffic and late-60s Who and maybe the Pretty Things, as well. 8/10

6. "A Matter of Trust," Billy Joel -- This is one of his two or three genuinely good songs. (I wouldn't know what the others are.) But it's still Billy Joel, for crying out loud. 3/10

Otto, the album cover reminds me that you never returned my Chuck Berry videos. Please do so asap.

For the rest of you, just know that this isn't the worst album cover I've found, just the worst I feel I can put on the blog without needing to confess it to a priest.

I have nothing to add other than to give props for giving props to the late, great Russell Bell.